The entire historical city of Yazd in Iran is recognized as a world heritage site by UNESCO since 2017. I was recently able to visit this amazing city and learn about the history, library and archives, and the beautiful architecture that has lasted for centuries.

This sacred fire has been burning for 1531 years!

The sacred fire of Zoroastrians in Atashkadeh -Yazd in central Iran is stated to have been burning since about 470 AD. The introduction statement signage by the temple entrance reads: “This flame is from the Pars Karyan sacred fire temple which was brought to Aqda where it was kept for 700 years, then transferred to Ardakan in 1174 where it was kept burning for 300 years until it was moved to Yazd in 1474. The sacred fire was brought to this temple in 1940.”

Vaziri Library & Archives in the city of Yazd

This library & archives was established in 1955. Researchers and archivists have access to more than 5000 rare manuscripts, 6000 Lithographic (printed on stone) books which was mostly donated by people who cherish arts and believe in preserving cultural heritage for the future generations. Among these treasures are the more than 800 years old Divan-e-Hafiz, Golestaan-e Saadi, and Ibn Sina’s ‘Canon’. 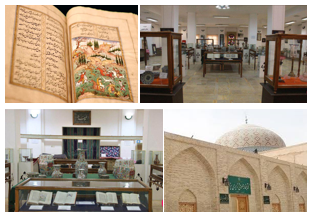